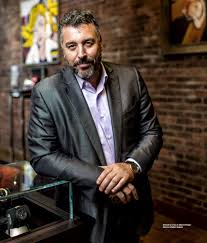 One of Rick de la Croix’s best conversation starters is an all black watch, with black hands on a black face, Thus was one of Hublot’s early designs, with only 250 made. “It’s true you, you couldn’t really read the time.” Which is exactly why a stranger in St. Barths offered to buy it right off his wrist. “He said ‘It’s amazing, but why do you wear it?’ It didn’t make a lot of sense, but I thought it was cool and iconic. [Eventually] the whole industry copied the black on black.”