In the watch world, Hublot Chairman Jean-Claude Biver and CEO Ricardo Guadalupe attain near God-like status–which means that Rick De La Croix has essentially been deified. After helping to revive the Swiss watch brand and transforming it into one of the most powerful brands in the world, Guadalupe and Biver have entrusted their disciple De La Croix, Hublot’s exclusive partner in the Americas, with its next steps.

There is no one better prepared to help Hublot achieve its potential in the New World than De La Croix. He is the man who has already made his Miami boutique the brand’s top-grossing location, according to Biver. Herewith, the gospel of Rick De La Croix.

The scene was Star Island, a stunning mansion where Miami’s best and brightest gather during Art Basel week. Chef Todd English arrived by helicopter and Tom Cruise’s son Trey Smith played DJ, while guests like Lenny Kravitz, Eva Longoria, Serena Williams, and Jared Leto  enjoyed Dom Pérignon. The event in question was Hublot’s Art of Fusion party, the hottest ticket of the week. From their Bal Harbour boutique to their partnership with the Miami Heat, the King Power 305 and the brand new Lady 305 dedicated to the city, and brand ambassador Dwyane Wade, Hublot has taken over the city with the help of a one-man army: Rick De La Croix.

Representing Hublot in the Americas, De La Croix has helped Hublot become the juggernaut it is today–while blazing a new trail for the modern business mogul. Gone are the days when a company’s marketing department merely renewed annual placements in print, booked a few spots on TV, and went home. Social media has transformed the way companies interact with their customers, bringing a new era of connectedness. Few understand this revolution better than De La Croix. Tasked with developing a market with more than 25% of the Earth’s land mass, De La Croix not only  partnered with Hublot on ten boutiques (five in the US), but he also has developed each space into a cultural destination. 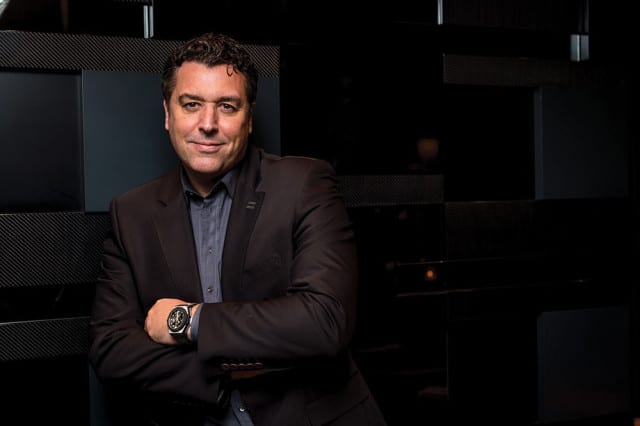 In Brazil, Hublot teamed with Pelé, who is arguably the greatest soccer player ever, in advance of the 2014 World Cup. In Jamaica, it’s the fastest man in the world, six-time Olympic gold medal-winner Usain Bolt. And then there’s the brand’s partnership with Jay Z, which resulted in the Shawn Carter Classic Fusion.

“I was one of the founding distributors of the company, so I have my own little touch on what works and what doesn’t work,” De La Croix remarked. “To build the brand, initially, we didn’t have the funds that we have today, so we’ve always had friends of the brand. And all these ambassadors of the brand are people we do events around, either with their charities or launching their personalized editions. That creates interest, it creates buzz, and it’s been part of the domino effect as to why we’ve been successful and in the news.”

With each headline, the brand grows its position and stakes out future customers. “Our strategy has always been trying to identify with leaders in their individual realms, and then obviously Hublot aligns itself with these leaders,” De La Croix explained. “When Jay Z goes on record with a new watch with a Hublot, you’ve millions, if not tens of millions, of young people saying, ‘Well, what’s Hublot?’ We’re talking differently to the clients.”

While some of the luxury watch market’s oldest names remain entrenched in the past, De La Croix embraces change. Active on his own Twitter handle, De La Croix understands that this new medium can be harnessed to Hublot’s advantage. “If you look at what the young people identify with, it’s social media and reality TV, which didn’t even exist 30 years ago. Today it’s become an influence, and people like the Kardashians influence millions of young people. That’s the world of today, and like it or hate it, it’s the reality. So you have follow the flow, but we always try to be a leader in what we do. Allowing a consumer to talk to me or to talk to our chairman any time of the day and actually get a reply is what builds the brand, when people feel they’re part of the family. That’s what we aspire to do.”

At the heart of De La Croix’s innovative approach is a healthy respect for and awareness of the world outside the watch industry. Born in the UK to an English mother and a Swiss father, De La Croix originally had his heart set on becoming a professional soccer player. After university, he got into the watch industry “by accident”, going to work for the marketing branch of TAG Heuer. After stints at Zodiac and Corum, De La Croix had gained experience in all things watches; how they’re made, how they’re serviced, how they’re sold.

It wasn’t long before De La Croix took things to the next level, establishing his own distribution company DLC Trading (now the Myconian Luxury Group). “I wanted to get into a market that was undeveloped, that was challenging, where luxury brands had stayed away from,” De La Croix explained. “I chose Latin America, and I went down to Colombia and set up my company there. At the same time I fell in love with and married a beautiful woman who is now the mother of my children.”

In 2005, De La Croix met Jean-Claude Biver, now Chairman of Hublot. “We had an instant chemistry, and he invited me to join him in his new challenge, which was taking over Hublot,” De La Croix said. “At the time, it was a bankrupt company that was losing money. Jean-Claude had this vision, which was the Big Bang. He had a concept, which was the Art of Fusion, of bringing in different materials that had been in very limited use in the watch industry. He said ‘Rick, I want to give you the chance; I’d like to take over and run the Americas.’ Which I did, and I guess it was the right time, in the right place, with the right people, with a guru at the top who was spinning his magic around the world, because Hublot took off.”

It’s a modest way of describing De La Croix’s part in Hublot’s growth, to say the least. Ricardo Guadalupe, CEO of Hublot, said he never imagined just how crucial De La Croix would become when he brought him in to his company. Guadalupe and De La Croix come from the same small Swiss town of Neuchâtel, and have known each other since they were kids. “Both in products and distribution, Rick is a master and a guide for the South American and North American markets,” Guadalupe said. “At the table, with his enthusiasm and our shared madness, we designed the new 2014 limited series for the American boutiques, Miami, Houston, Orlando, Dallas…and they are just fantastic.”

Shared madness is a cheeky way of describing the deep trust between De La Croix and Hublot’s top executives. No matter how grand or challenging, De La Croix helps bring to life what Hublot’s leaders dream up. Take, for example, the limited edition Big Bang created in collaboration with Depeche Mode in support of charity: water. Or the Hublot Collector’s Clinic, which gave clients the opportunity to hit center court with some of the Miami Heat’s most famous players, including Dwyane Wade, Ray Allen, Shane Battier and Juwan Howard. The clinic and VIP dinner that followed was just one of countless priceless experiences De La Croix has executed.

Kenny Burns, the influential Atlanta-based cultural curator, summed up the on-the-ground experience Hublot customers get thanks De La Croix; “Attention to detail in fashion is what separates the great designers from the existing ones, and I believe this holds true to the ‘living room’ concept that Hublot has created with their amazing boutiques,” Burns said. “From the suede walls, to the black lacquer finishes on the hidden display boxes to the glass display cases seamlessly placed in walls with sliding hand access. Detail doesn’t stop with finishes and details of the room though: guests are treated to the finest Moët Hennessy champagne, and spirits from around the world while they shop or browse. They’re also given memorable keepsakes, from Ferrari x Hublot-branded keychains to Arturo Fuentes cigars. And then there’s that unbelievably attentive sales personnel that are unassuming and informative. Whether they’re letting the customer know about the intricacies of the masterful timepieces or holding court with phenomenal conversations about music, fashion, automobiles, lifestyle and everything that represents luxury.”

But perhaps most important of all are the ties De La Croix has fostered with the communities in which he does business. De La Croix sits on the boards of several charities, including retired Miami Heat legend Alonzo Mourning’s foundation. In Miami, De La Croix works closely with the Miami Heat Foundation and Ray Allen’s Ray of Hope Foundation. In Las Vegas, De La Croix worked with the World Boxing Council to raise more than $1,000,000 for the WBC’s charities. In Atlanta, he worked with rapper Ludacris and The Ludacris Foundation, which supports organizations like the Boys & Girls Club of Atlanta.

Suffice it to say, when we reached out to the causes he supports, we were flooded with feedback about his impact. Ray Allen described how, after meeting at a gala, he and his wife Shannon bonded with De La Croix. “We had an immediate connection beyond the obvious stuff like our common love of basketball, watches and traveling. We happen to live in the same subdivision and our kids go to the same school! His participation and passion has ensured that the Ray Allen Golf Classic [which is presented by Hublot and benefits the Juvenile Diabetes Research Foundation and the Diabetes Research Institute] will become a must-attend event on the Miami social calendar.”

Meanwhile, World Boxing Council boss Mauricio Sulaiman described how the idea to fund the WBC’s charitable programs came to fruition after meeting De La Croix. “The idea was explained [to him] in less than one minute,” Sulaiman said. “Rick’s reaction was immediate and he pitched the plan on how it could become a reality. In less than five minutes we stood up, shook hands, and today we can pride ourselves on the historic relationship that has been developed, but better yet of a lifetime friendship with such a great human being. All sports suffer from seeing athletes fall on hard times after their days of stardom are long gone and in boxing that is very common. My father, the President of the WBC had a wish, to raise $1 million to start the WBC Champions Fund. Hublot stepped up to the ring and made it possible by working hand by hand with the WBC, securing 12 legendary champions to participate in a memorable event in Las Vegas, auctioning 12 unique watches, and yes, raising $1,000,000!”
–

Despite his status as a leading figure in the community and as one of the luxury watch industry’s most important trendsetters, De La Croix remains humble. Although he prefers not to discuss new boutiques until they’re open, De La Croix did acknowledge he is evaluating new markets. “Every step in its due,” De La Croix said. We don’t doubt that no matter where he goes, De La Croix’s dedication to and passion for the brand will see Hublot’s continued success. “I’ve been very lucky to be part of what was a dream and has become a reality,” De La Croix concluded.